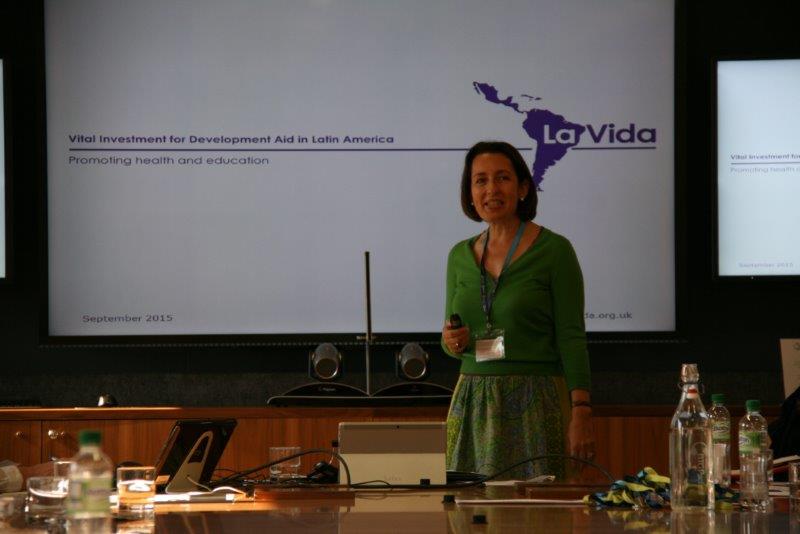 The 3rd Annual Latin American Charities Forum took place on 10th September 2015 in the boardroom of BTG Pactual in London.  The event was once again organized and co-hosted by La Vida and the LATA Foundation, and was attended by almost 30 people representing 17 charities.
The aim of the Forum was to bring together like-minded people with strong ties to Latin America and a passion for making things better.  In the words of one attendee:  “I think that it is enormously worthwhile – where/how else would one get such a large number of smaller charities together, with such a common interest.”

David Gilmour of the LATA Foundation moderated the meeting, while Helen Ilsley of La Vida contributed opening and closing remarks.  There were short presentations by the co-hosts: George Mcbride gave an overview of the LATA Foundation’s work, while Rosie Bichard explained La Vida’s project selection criteria.

Deb Burke from Global Fund for Children gave a fascinating presentation explaining their “Scout, Support, Strengthen” approach to projects, explaining that a large part of their strategy is not only funding projects, but helping them become the best operations they can be.  She discussed their Capacity Building Services, which the majority of the projects actually said had more value than the funds themselves.

Emily Jesshope from Quest 4 Change presented an in depth overview of their projects in Peru, and Jonathan Cassidy then discussed the main challenges they are facing as a charity.  The three primary challenges: Volunteers vs Voluntourism – where travel companies are now offering volunteering options for a lower cost/project contribution than Quest Overseas has traditionally asked.  He also discussed the challenge of ensuring that local reporting requirements are up to an acceptable level (he emphasised just how helpful Rosie and La Vida had been in helping them improve at Villa Maria).  Finally, in line with most (all?) charities, he also mentioned the challenge of LT fundraising.

Brendan Hanlon from Just a Drop focused his presentation on their recent successful crowdfunding exercise.  He broke down the whole crowd funding process into a 10 point plan, which was really useful and interesting, and it sparked an interesting discussion afterwards.   We also talked about the value of story telling and using case studies to engage the public and donors.  Just a Drop’s crowd funding slogan was “Help Carol’s village get fresh water”.  However, using an individual has to be done with great sensitivity, as their future selves may not wish to be associated with their former poverty/drug abuse/sexual abuse.

Overall, a very successful evening – thanks to everyone for their participation and contribution to the Latin America Charities Forum!